Lumik was a noble human wizard and hired mercenary, known for his hedonism and charm. He died in the city of Furi during a quest to restore his party member and save Furi from a mysterious curse.

Lumik was born in the human city of Port Exarlia (within the borders of Valdramier) to wealthy noble parents who saw his pure white skin and bright red eyes at birth as an auspicious sign of good fortune and blessed by Imrotar, patron of wealth, merchants and commerce. He was given the best schooling and magical training money could buy, before being groomed to take over the family’s wine export business.

Upon entering his teenage years, Lumik rebelled against his parent's strict rules and overbearing expectations, taking to satiating his base desires with longs nights and days drinking at expensive clubs/bars or visiting the city's brothels.

Lumik refused to honour his longstanding betrothal to Mit-Amen Hortara, daughter of a wealthy merchant family who's home lies on the shores of Chaoksa. Such an alliance would have greatly expanded both family's mercantile interests, and given them enough power to challenge the dominance of Oxalia shipping and exports. Lumik exclusively preferred the company of men, which lead to frequent fights with his parents over Lumik's refusals to carry out his duty by wedding Mit-Amen, producing an heir to carry on the family line. Eventually his father gave him funds to travel, under the agreement that he could do as he pleased for a year, enjoy as many drinks and as many men as he liked; the sole provision being that after that he return home and honour his betrothal.

- funding the crime solvers hang - Duel at the club

During investgations in the city of Furi, Boris came across a staff in a heavily fortified vault. When Lumik handled the staff it was revealed to be sentient, and communicated with him. It seemed to approve of his magic, and agreed to aid him, giving only the name Raldarsh. This staff gave Lumik resistance to possession.

Lumik was slain in the Dwarven city of Furi, miles beneath the sunlight skies of Gadriel. While scouting the city for supplies, Lumik and his party were set upon by a fission slime which absorbed Lumik. While slowly being digested, one of his new allies set upon the aberration with unabated fury, slashing through the creature and striking a fatal blow to Lumik at the same time. His party cremated his body where he died, after the witch Acacia removed and preserved one of his fingers.

After Lumik's demise his soul was absorbed into his staff; unknown to Lumik, the sentient staff fed upon souls and was a creation of Raldarsh Tokara. Lumik's soul was encased in a small silver chamber filled with the tormented cries of hundreds of other souls, joining them in damnation. 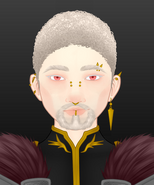 Add a photo to this gallery
Retrieved from "https://gadriel.fandom.com/wiki/Lumik_Yveseiran?oldid=985"
Community content is available under CC-BY-SA unless otherwise noted.